The overall dashboard is a report that gives you a clear idea of how your campaigns are progressing. It measures the performance of your campaigns by tracking all the relevant metrics like click rate, open rate, submissions, etc.

With these metrics, you can make an educated decision on what your users like and what they don’t.

Overview of the Overall Dashboard

There is a Quick Summary that gives you a cumulative report of all campaigns sent. This tells you of your company’s total outreach with all your campaigns combined. 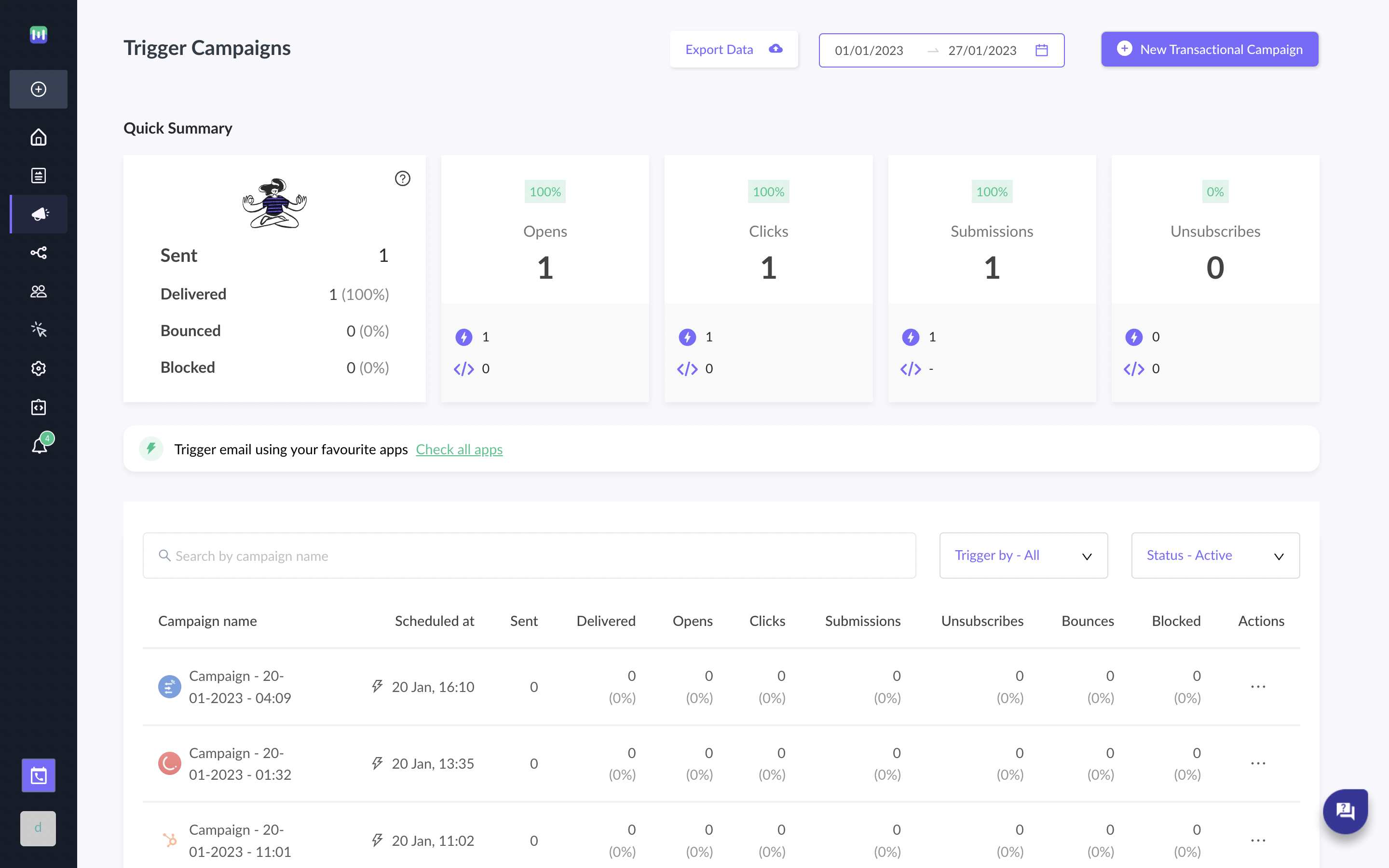 The Export Data action on the overall dashboard lets you import data of all your campaigns in one CSV file.

With the Date-wise filter, you can see the overall performance of your campaigns over a particular period of time. Just enter the dates in the given calendar as shown below. 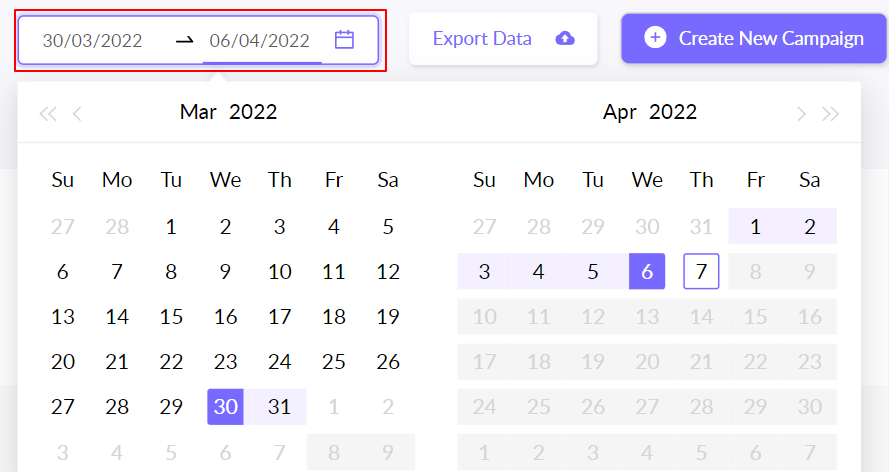 Overview of the Individual Dashboard

There are multiple sections of the report that gives you an in-depth summary of your campaign. There are six sections - Trigger info, Dashboard, Summary, User Data, Submission, and Insights. 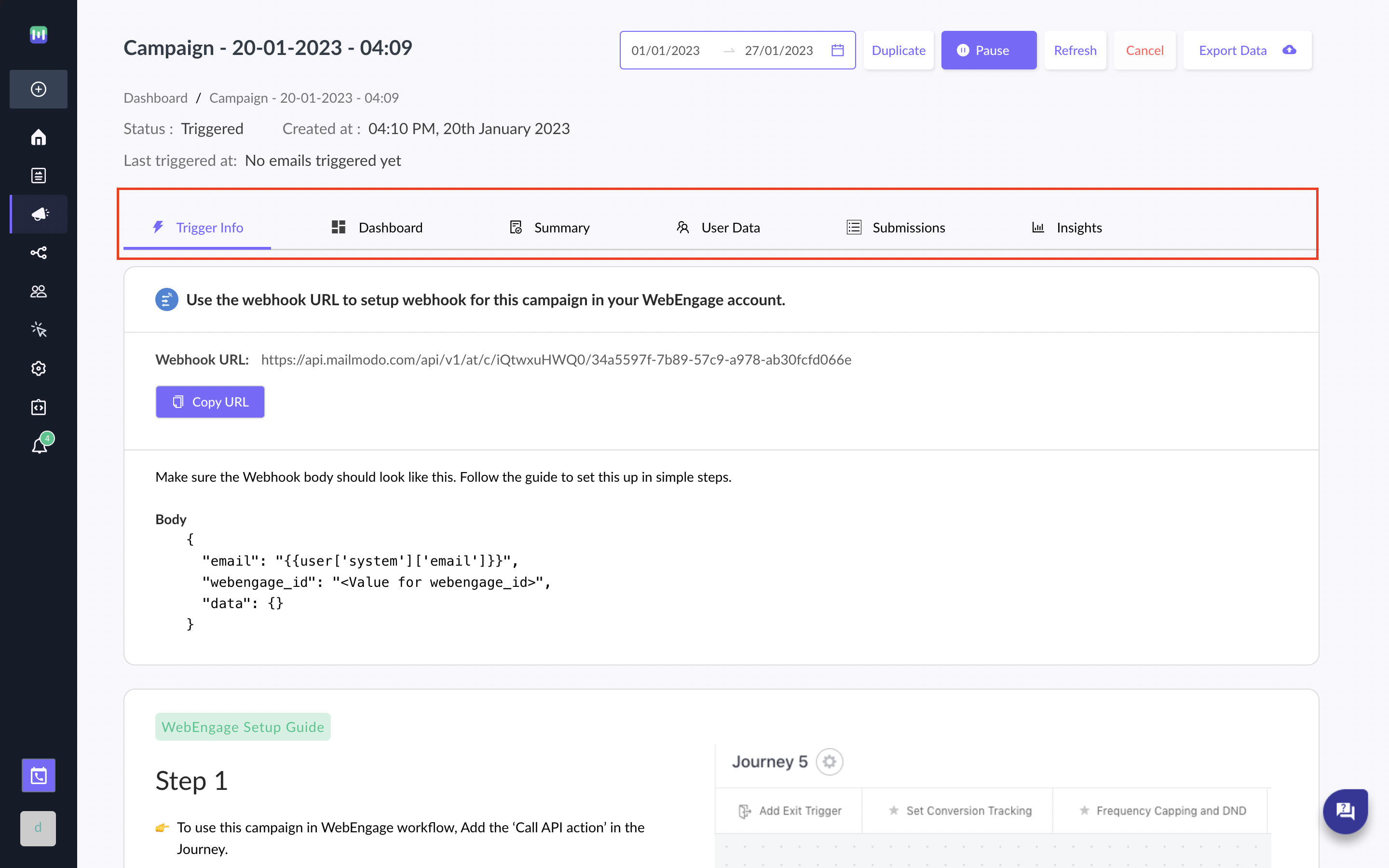 Now let’s see what actions you can perform on the individual dashboard.

Here are the actions you can take on the individual campaign dashboard:

The Duplicate button is used to make a copy of any previous campaign. When you click on Duplicate, the details of the campaign that was opened get copied and pasted into the start of a new campaign. You don’t have to fill in the subject line, preheader text, from name, etc. 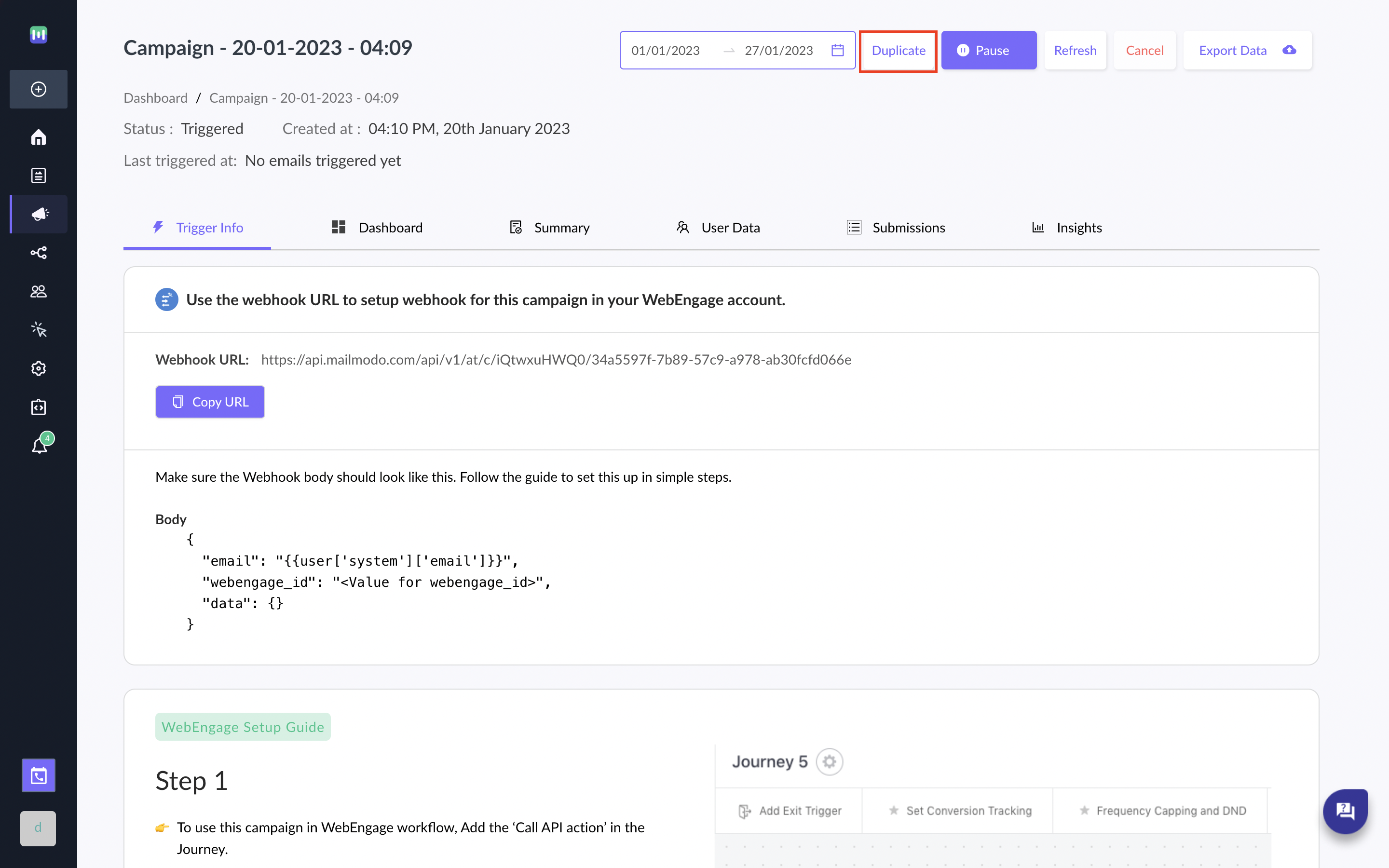 This button is used to remove a campaign from your dashboard. You can no longer see it on the dashboard.

But the campaign doesn’t completely disappear. It is saved in Mailmodo's database. To retrieve it, you’d have to put a request with the support team.

When a trigger campaign is launched, it goes on forever. It means that any submission or signup will trigger a response as long as the campaign is running. It will only stop when you click on the Pause button.

After clicking on Pause, the button will show Resume, which means the campaign is paused and is ready to be continued.

This button is used to make sure any changes made to the template while the campaign is running get reflected in the campaign.

For example, if a template has the line “Join now to get 35% off”. You changed it to “Join the list for 50% off”. The refresh button ensures the change you made gets updated in the ongoing campaign.

When you click on Cancel, a window pops up showing it is a non-reversible action and it will stop the ongoing campaign. It means the signups or submissions will not trigger any event.

This button is used to export different kinds of data from a campaign.

You can export 3 types of data - Campaigns Data, Clicks Data, and Form Submissions. Just click on Export Data to choose the aforementioned options. 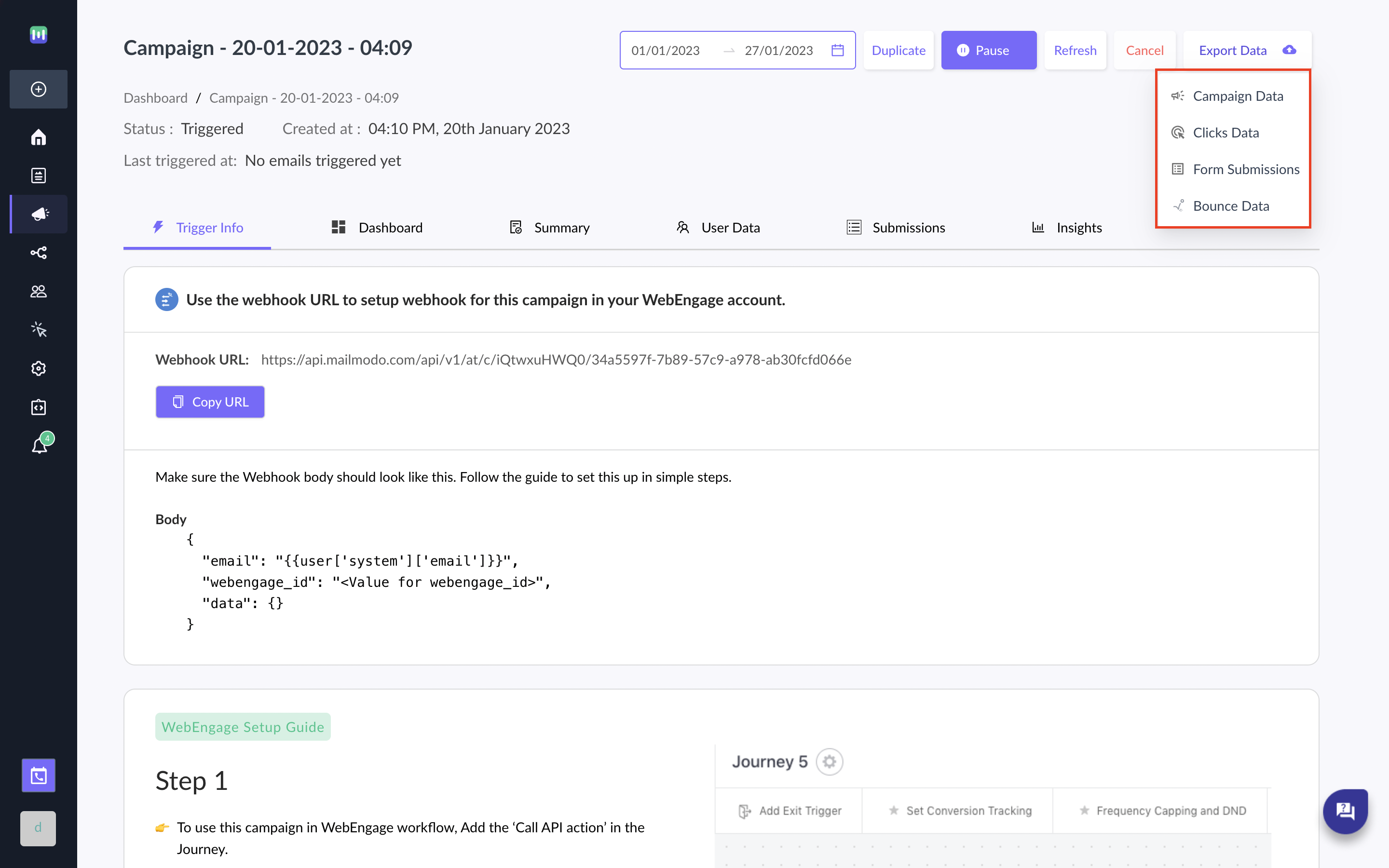 When you click on either of the three, the data gets exported to a CSV file.

This tells you the overall details related to a campaign like HTML opens, amp opens, HTML clicks, AMP clicks, etc. When you click on Campaigns Data, a CSV file gets downloaded which contains all the information you need.

You can get the data for both bulk campaigns and trigger campaigns.

Clicks Data or Click-through rate data is the proportion of people or subscribers who click on a particular link out of the total users who view the email.

CTR (click-through rate) is often considered a reliable metric while measuring the performance of a campaign. But campaigns with multiple links or CTAs, knowing what’s getting the most clicks can help you create better campaigns in the future.

You can obtain the clicks data for normal bulk campaigns as well as trigger campaigns.

Refer to Link Wise Click Tracking to learn how to export the clicks data.

This page shows you the Webhook URL that will be generated. Use this webhook URL in your desired platform. The campaign will be triggered based on actions or events recorded on your platform.

The individual campaign dashboard is a visual report that gives you a clear idea of how your individual campaigns are progressing. It measures metrics like clicks, opens, submissions, etc., to better understand what your users like and helps you send campaigns according to their preferences. 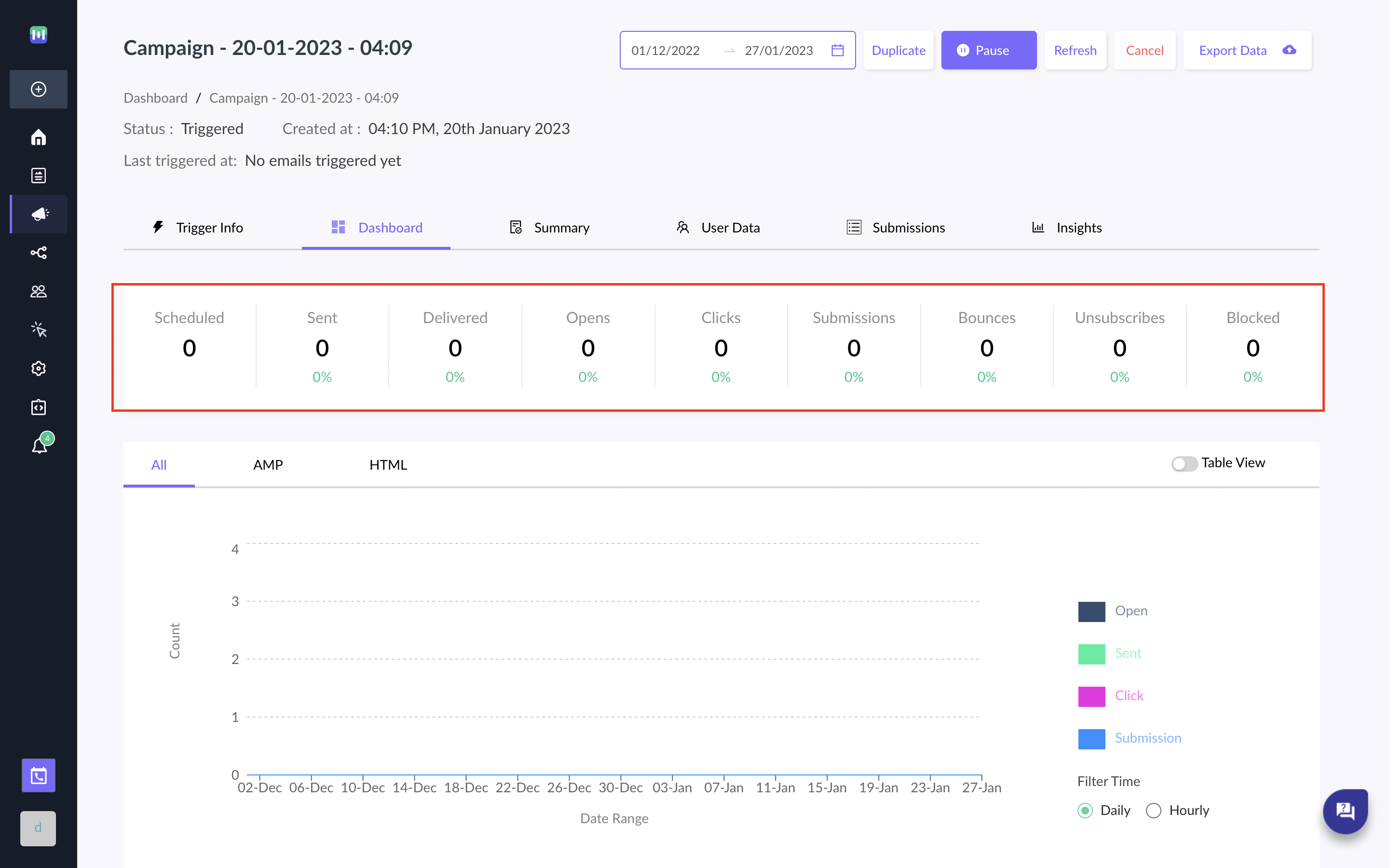 The following parameters are tracked for every email campaign sent via Mailmodo:

It's the number of emails sent in the campaign.

It's the number of emails that were delivered to the recipients.

It's the number of unique recipients who have opened the campaign.

It's the number of subscribers who ‘click’ on at least one link in the email.

It's the number of subscribers who submitted the form in the email.

It's the number of hard and soft bounces from the subscriber list.

It's the number of contacts who have unsubscribed (from your list).

It's the number of contacts that were not sent this campaign because they unsubscribed or got bounced in the past.

Under Recipient Details, you have your list name, its audience size, and its creation date.

Under Campaign Details, you have the campaign’s name, the name of the template you’ve used, pre-header text, subject line(s), reply-to email, from email, and from name.

The same goes for Click Html and Click Amp. It shows the number of AMP/HTML elements the recipients have clicked in the email.

The responses of the form, quizzes, polls, etc., designed in the email template get stored in the submission tab of the analytics dashboard for every campaign.

It shows you a generic view of the responses submitted by the recipients. The numbers here are shown in percentages. It means it tells you what percentage of recipients chose a particular answer (in the case of a quiz).

It shows a graphical representation of the campaign’s performance which is color-coded to better differentiate between the metrics on the graph.

You can view the graph for AMP as well as HTML in case you want to see how they performed in comparison to each other.

Also, the AMP vs HTML performance is shown in a table below the graph under ‘Performance Summary’.

If you wish to see a tabular view, click on the table view toggle button. The table will look something like this:

Did you find it helpful? Yes No

Send feedback
Sorry we couldn't be helpful. Help us improve this article with your feedback.